Years ago, when Exreme Makover, Home Edition was at its peak, I watched an episode about a widow with a handful of children and a crumbling house.  I can’t remember how her husband died, or much about the makeover, but I do remember that in the middle of touring the gorgeous new home Ty Pennington and crew had just created for her, she stopped and, with a look that was somehow a mixture of both hope and resignation, she said, “There is happiness for us, in this life.”

I remember this because I was enduring my own hardships at the time.  Like many believers, I had a slew of Bible verses and stories at my fingertips and I knew about Gods love, His ability to make beauty from ashes and rescue His children from danger.  I wanted to find comfort in these things, but I know the truth, which is that God doesn’t always make beauty from ashes and some of His children don’t get rescued from danger.  (Don’t waste our time trying to talk me out of this point.  I’m a Calvinist, and I’ve been to Ukraine.)

Besides, reading about the end of someone else’s story, even if they do get rescued, isn’t all that helpful when I happen to be in the middle of my story and might be headed for a different conclusion.  I’m glad Jesus raised Lazarus from the dead but He hasn’t been doing that sort of thing lately, so it looks like I might need to accept the alternate ending for my own time on earth.

What I really wanted was someone here, now, who was enduring some of the same things I was enduring, with no promise of an imminent miracle, but could still look me in the eye and say, “yeah, I don’t really get what’s going on here.  I’m in agony and I hate this but even so, I know that God is good.”   That widow’s happiness, even in the midst of all her sorrow, was more along the lines of what I needed to hear.

Fast forward to 2014.  I don’t hate my life, but I have been in a bit of agony.  A few years ago, I wrote about the death of our good friend, Bruce, and his funeral at .  It was three years ago, last month, that we buried him.

When Bruce died, I told his wife, Maryann, to call me anytime (day or night) that she needed to talk.  Her mom had died when she was in college and her dad died a few years later.  I hate the idea of anyone feeling alone in this world.  So, I kept encouraging her to call me and to my great relief, she did.

That first year, she called every day and sometimes two or three times in a day.  Once or twice she called in the middle of the night.  I didn’t mind. I was grateful that she trusted me with her grief.

Often when we talked, the first thing she would say when she got on the phone was, “I miss Bruce!”  Then we would both tear up and I would ask, “what would you tell him if he was here?”

So, that first year we spent a lot of time together.  We had Thanksgiving together and Christmas.  We made sure she had plans for things like their anniversary, the anniversary of Bruce’s death, Bruce’s birthday, Maryann’s birthday...   It’s bewildering, the extent to which events that are usually so very wonderful become so very not wonderful when someone is missing.

Sometime toward the end of that first year, I ran across a friend of ours from church.  His name is Mike.  I was in a women’s Bible study with his wife, Brenda, a few years earlier.  She had been fighting cancer for a long time and tragically died about three months before Bruce.

I waited a few more months, and then I introduced Maryann to Mike.

So, there was a year of loneliness, then a year of dating.

They went back and forth for a while and I really wasn’t sure they were going to make it.  They lived two hours apart and were attempting to blend a lot of family history.  Most of my conversations with Maryann were still about Bruce or their kids.  She still missed him dreadfully and I wondered if her heart was really open to anyone new.

And then one day when I picked up the phone, to my great relief and joy, instead of saying, “I miss Bruce,”  she blurted out, “I miss Mike!”

So, there was a year of loneliness, a year of dating, a year of engagement and last week they got married.

My friend Maryann got married to someone who is not Bruce.

I held it together though, because I’m just that good.

I was really doing OK for most of the ceremony.  It got hard in the middle because they had invited the families of their first spouses and I got a glance of Bruce’s dad sitting in the front row.  Bruce’s dad looks almost exactly like Bruce and Brenda’s sister looks almost exactly like Brenda.  That was hard enough to swallow, but on the way to the banquet hall, a friend of mine mentioned that I was the only person at the wedding who had been friends with both Bruce and Brenda.  For some reason, this brought clarity to the one thought that had been lurking at the back of my mind all weekend, “Please… don’t let this be real.”

I totally lost it then, because I’m just that pathetic.

Of course, there were no tissues anywhere and the bathroom was outside the banquet hall and it was raining. I went over to the food table, grabbed a napkin roll and threw the plastic silverware in my purse.  By the end of the night, I had a table setting for six.

I looked around and realized that I was the only one crying.  I had planned ahead for this.  I took on the job of decorating the getaway car.  Bill and I found a few boys to help us collect cans, borrow a few hydrangeas from the table centerpieces and make a sign.  Then we all went to the parking garage and decorated.

Wouldn’t you know, when Maryann and Mike left, he escorted her around the front of the car and the photographer didn’t follow them outside.  No one saw the decorations besides me, Bill and handful of boys.  To be fair, it was raining, but it was an awful waste of some good centerpieces on a mighty fine car.  Unappreciated beauty is so tragic!

I realized as we walked back into the banquet hall that Maryann and Mike were handling things much better than me, even though they had lost far more.  The upcoming week in might have had something to do with it, but even so, Maryann has mentioned that one of the hardest things about marrying Mike was the full understating that God might take him away too, at any time, just like He took Bruce. 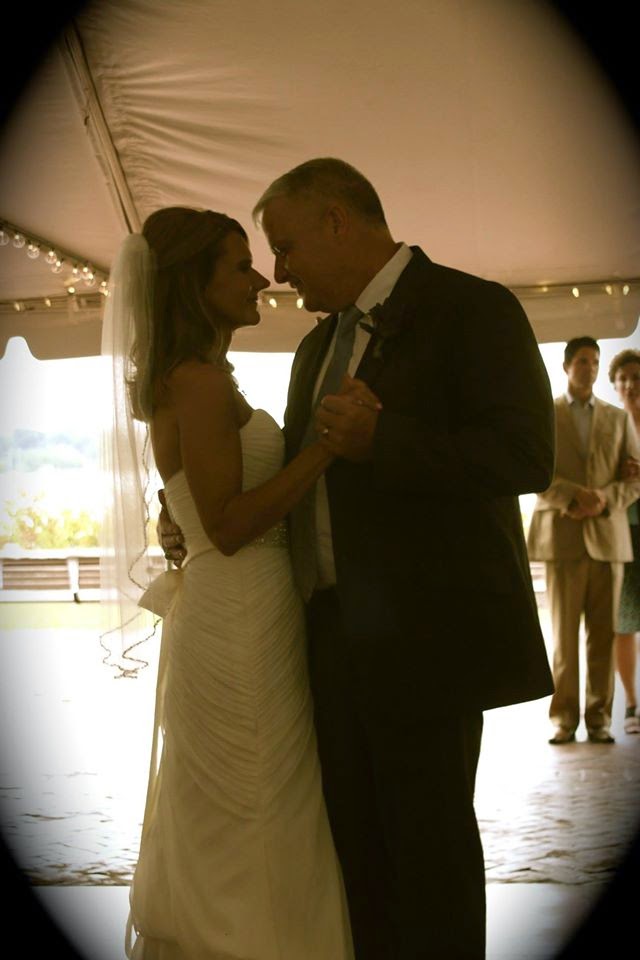 It was not the same as other weddings I’ve been to, where God seems so much more kind and the world seems so much more safe.  Yet here were Mike and Maryann, beaming as they got into that car.  They were reveling in their supreme act of bravery—being willing to love another person, despite the challenges, the pain and the risk involved.  It was not that God made beauty from their ashes.  It was that they accepted His beauty, along with their ashes.

I’m starting to understand that look on the widow’s face.  There is happiness for us, in this life.

Marnie
This blog began as a record of our trip to Ukraine where we adopted two boys in 2010. Since the blogging was getting a little boring over time, we added two girls from China in 2013. To answer the obvious questions; Yes, we have nine kids (eight still at home). Yes, we’d adopt more kids if we could afford it. Yes, our house is a wreck. For the record, our girls do not take ballet, our boys are mediocre at soccer, and none of our children are in the gifted program at school. Nevertheless, God loves us and sent His son to die for our sins! The blog title is from a poem by W.H. Auden (Finding Atlantis). As soon as I heard the phrase, I thought it perfectly described our schlepp through life. When things fall apart, we remember that we give from a ridiculous spiritual/emotional abundance because we drink from streams of living water that never run dry.